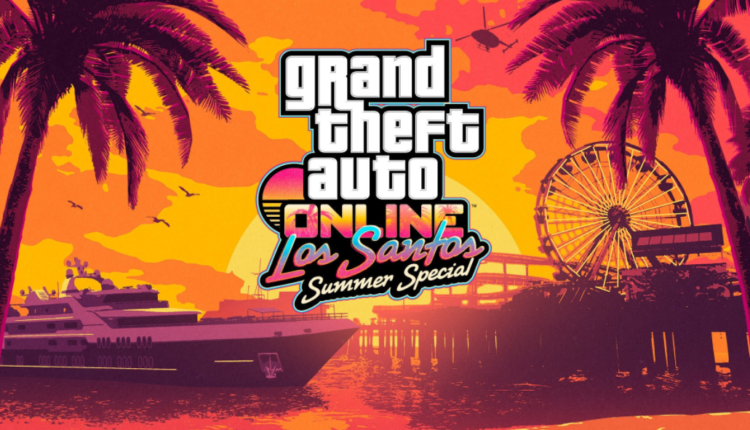 The Los Santos Summer Special Update for GTA Online is out now on PlayStation 4, Xbox One, and PC. Announced last week, update 1.34 adds a host of new activities to participate in.

The 15 new cars are split across three dealerships: four at Legendary Motorsport, five at Southern San Andreas Super Autos, and six at Benny’s. The weekly podium car you can win at the casino has also been changed to a Sheava ETR1 worth $1,995,000.

In total, there are nine new Open Wheel race tracks, from racing across Land Act Dam to dodging turbines in RON Alternates Windfarm. Two new Open Wheel race cars are also included, and Rockstar has made a few improvements to Open Wheel gameplay, including the ability to change tire type when pitting and new visible tire wear and body damage indicators.

The Los Santos Summer Special Update also introduces the Open Wheel Race Creator, allowing you to design and craft your own custom tracks using a bevy of creation tools. There are over 60 new props at your disposal, including racetrack archways, pit-stops, paddocks, and more.

New Business Battles have also been implemented as part of the update. These revamped competitions take place at new locations across the map and dish out massively increased rewards. You might stage a cooperative assault on an idling aircraft carrier or fight and hack your way through several factories to reach the nucleus and earn bundles of cash. Winning a Business Battle between now and August 19 will earn you the Pink Dot Tech Mask as well.

The Diamond Adversary series brings eight high-stakes modes to The Diamond Casino and Resort, including tense fan favorites like Every Bullet Counts and Slasher, as well as competitive mayhem in Hardest Target and Resurrection. The casino has also added two new arcade machines as QUB3D, which last featured in Grand Theft Auto IV, appearing, along with a game called Axe of Fury.

Aside from new content, the update also makes a few quality-of-life improvements. Lester’s calls have been changed to text messages to reduce spam, requesting a Pegasus Vehicle is more convenient, and it’s possible to return any of your personal vehicles to storage.

Prime Gaming subscribers who have connected their account to the Rockstar Social Club can now earn the latest weekly $200,000 bonus. You can also grab the Vespucci Canals Nightclub location for free, along with access to a special discount that gives you 70% off the Grotti X80 Proto and 80% off the Bravado Gauntlet Hellfire.