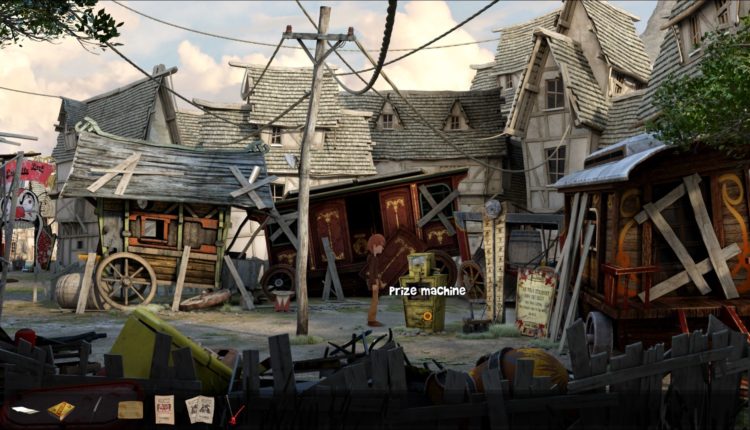 The classic point’n’click quests has long looked like an anachronism. The genre does not succeed in keeping up with the times. All it has to offer a potential player is memes, gags and references to popular culture, more or less organically woven into the plot. And the Willy Morgan and the Curse of Bone Town is no exception.

Willie Morgan is an independent boy, largely due to life circumstances, because of which he remains alone at home for a long time. Mother always on scientific expeditions, and his father, Henry Morgan disappeared long time ago. No, Henry is not some bastard who left his family. He was an archaeologist, and the reason for his disappearance is directly related to his discovery of the pirate treasure. Henry found the trail of the treasure in the city of Bountown, where he was last seen. And ten years later, from Bountown, the matured Willie receives a letter written by his father. It says in black and white that Willie should come to this town. That, by the way, is not so far from the Morgan house – in any case, the young explorer is going to go there by bicycle.

The story came out roughly what you expect from the declared setting: treasure, pirates, archeology. Deliberately or not, but the descendants of the corsairs, whose gold Henry coveted at one time, all as one settled in Bountown and are, often without knowing it, the keepers of their part of the treasure map. Willie’s task is clear – to get all these pieces and find the treasure, and with it – to find out the truth about what happened to his father. Meanwhile, some people in the city are already waiting for the guy’s arrival – and this is clearly not a coincidence.

The plot in the game is quite simple, even unpretentious, the stamp “the main villain, who was least thought of” is attached. Still, the game is catchier with little things: the very memes with references, and even some characters. Among those, for example, a local pastor who reads sermons to himself and a geek who opened an “advanced” IT club in the city, where no one goes, will make you smile. References to the phenomena of modern mass culture are also very diverse: from the hammer of the god of thunder Thor to Colonel Sanders, the founder of the KFC network. This game even has a reference to casino slots! But, if you more of a fan of the gambling entertainment than videogames, you should check the website over here.

The problem is also in how the gameplay is presented. From the point of view of the gameplay, Willy Morgan does not make an integral impression at all. The first, essentially introductory location, where Willie wanders around the house, collecting parts for a bicycle, looks harmoniously. Upon arrival in Bountown, he checks into a hotel and there he solves the only elementary problem: he distracts the owner’s attention in order to steal the key from the locked room. The next morning, he goes out into town. A dozen locations leading to a variety of premises, from a library to an arms store, and a lot of conversations with local residents, including the descendants of the glorious corsairs, are waiting for him.

The catch in all this is that the game offers an extremely unfortunate line of behavior: first of all, it is best to get around everyone, taking along the way all the quest items, you may find, and only then actually act. The strategy hardly works for the overall favorable impression. At the same time, there are no questions about the tasks themselves, some wild and absurd combinations of objects to solve them have not been noticed. Original moves, with an emphasis on non-standard ingenuity, are rare in this game. Taking a picture of a rare pistol several times, and then printing a copy of it on a 3D printer in order to replace the original, is rather an exception to the rule. Also note that you don’t have to suffer from pixel hunting: active points can be highlighted.

The game is like an optional hello from the past. It looks nice, periodically pleases with humor, but you just catch yourself thinking that you could do some better things in your life. Perhaps only the fact of a short duration is able to push to spend an evening at Willy Morgan and the Curse of Bone Town. By the way, the only thing that was done well in the Willy Morgan game is the visual style.