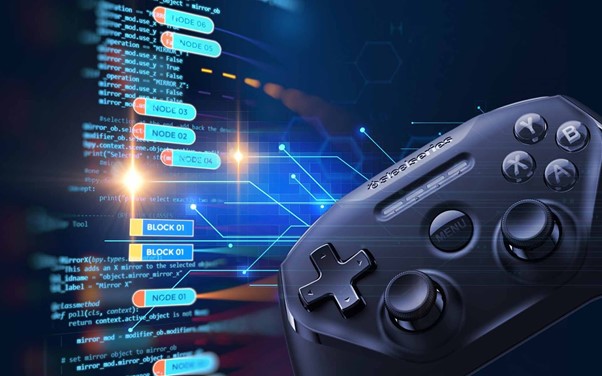 Bitcoin and the first blockchain were created in 2008 by a group of developers in Japan, solving the double-spending problem for a digital currency using a peer-to-peer network. Since then, the blockchain underwent significant developments and is currently paving the way for big makeovers in several industries, including the gaming industry.

A market worth more than US$100 billion and expected to reach over US$300 billion by 2026, the gaming industry is one that can benefit the most from blockchain technologies, as their decentralized structure allows players to retain control over the game, thus providing new gaming experiences.

There are already many games, and several others being developed, using different levels of decentralization as part of their gameplay. Through content monetization and smart contracts, these games offer true ownership of digital items, enabling play-to-earn models and cross-game interoperability.

One of the main aspects behind this is the emergence of non-fungible tokens, or NFTs, which are unique smart contracts in the Ethereum blockchain that cannot be interchanged. They are the tools that make it possible for gamers to retain true control and ownership of everything created in one of these games.

Allowing players to earn money through their efforts in-game, blockchain games are a glimpse into what the future holds for gamers and developers.

True ownership is a key feature in blockchain games. In traditional games, players spend hours and hours grinding to increase attributes, farming for gold and searching for rare items. All of this effort only resulted in in-game rewards, and gamers never held the rights to anything – developers and publishers did. Besides, when buying in-game items with real money through microtransactions, players only paid for the privilege of using those items, not for the ownership of them. So it was never possible to recover the money invested.

The decentralized structure behind blockchain games allows gamers to own any piece of data within them, including items, character equipment and skins, or pieces of virtual land. And they can buy, sell, trade or even rent these assets. Thanks to NFTs, creators hold the rights and are able to monetize their creations, earning money in the form of cryptocurrencies that can be converted into real-life currencies.

One of the most exciting new games based on blockchain technologies is The Sandbox Game, which is currently in its open beta phase. This game allows players to build virtual worlds, create interactive adventures and monetize their assets, through NFTs and the game’s own cryptocurrency, called SAND. With it, they can buy virtual lands, create levels and adventures for others to join in, access other players’ worlds and levels, and even trade in a marketplace. But SAND also functions as a governance token, so the more SAND a player has, the more voting rights he will have in the game’s metaverse.

Currently the hottest trend in the blockchain industry, non-fungible tokens are non-interchangeable units of data on a blockchain, representing an unique digital item, such as art, videos, music or items in video games, and providing buyers with proof of ownership. Most gaming NFTs are smart contracts based on the Ethereum blockchain, using specific token standards called ERC-20, ERC-721 and ERC-1155.

The first game to use NFTs was CryptoKitties. In it, players can collect virtual cats that are ERC-721 tokens. These cats can be bred, sold and traded, and their values are affected by their attributes and market fluctuations. Since its release, in 2017, CryptoKitties became a sensation, attracting thousands of players and generating huge amounts of revenue; some cats were sold for more than US$100,000. Even today the game is still very popular, with over 5,000 players in the last month generating more than US$3 million.

Amounting almost US$2.5 million in income in the last month, Gods Unchained is one of the most popular games that use non-fungible tokens. It is a turn-based competitive collectible card game, with mechanics similar to Magic: The Gathering and Hearthstone. The objective is to collect hundreds of unique cards and assemble them in effective decks to battle opponents in PvP matches. Each card is an ERC-721 non-fungible token, and players can buy, sell and trade their cards through an in-game marketplace. Cards can also be obtained in card packs sold at a variety of decentralized marketplaces.

Unlike traditional games in which all rights belong to developers and publishers, blockchain games were created to grant players true ownership through NFTs, and reward their creativity and entrepreneurship, by allowing them to control the game and make money through it. NFTs are here to change the world of online gaming, bringing blockchain technologies and video games together, offering players new incredible gaming experiences.