Stellaris was released today on Steam and some users encountered different bugs and issues in the game. Some of this issues are major and some players are unable to play the game due to this issues, also, there are some minor bugs in the game that can be quickly fixed with some workarounds.

Explore a vast galaxy full of wonder! Paradox Development Studio, makers of the Crusader Kings and Europa Universalis series presents Stellaris, an evolution of the grand strategy genre with space exploration at its core.

The most encountered Stellaris errors that gamers reported on the Steam Discussions forum are Crashes, Performance Issues like Stuttering, Freezes, Low FPS and a weird issue in which the game is unable to start, players click on Play button and nothing happens or they are prompted with a black screen.

Below we will help you fix your errors with solutions and workarounds. Go ahead and skip to your issue if you are sure that you meet the system requirements.

First, make sure that you meet the minimum system requirements before trying to fix your issues with our guide.

#1 Stellaris Crashes, for some players the game crashes at startup or randomly through the gameplay. To fix this errors you need to follow our tutorial at the end of the post

“As title. Played for less than an hour. Crashing and freezing. Thank god for Autosave.”

“I launch the game and when I move the cursor around it shifts to the windows 10 interface cursor and then the last windows 10 windows opens when I click on the mouse. I can not ever start a game like this!!!!”

#2 Stellaris Not Starting, this issue is very common at this moment, your game simply won’t start. You click the Play button in Steam and nothing happens or you are prompted with a black screen and unable to play the game. To fix this issue you can follow our tutorial at the end of the post or the workarounds below.

“The game doesn’t turn on….. gets to drm paradox screen, then i click play game button and it flicks on and off plays background music but doesn’t turn the game on, stays showing my desktop.”

If you have problems starting the game in any way, try the following workarounds:

If the game still won’t start after doing the above steps, then completely reinstall the game.

#3 Stellaris Performance Issues, a lot of players are encountering performance issues in the game, the most common one is Stuttering but other users also reported Freezes and FPS Issues.

“I can’t play the game because of the stuttering, the graphic options for a pc exclusive game are just ridiculous. Where is V-sync?”

How to Fix Stellaris Errors Tutorial: 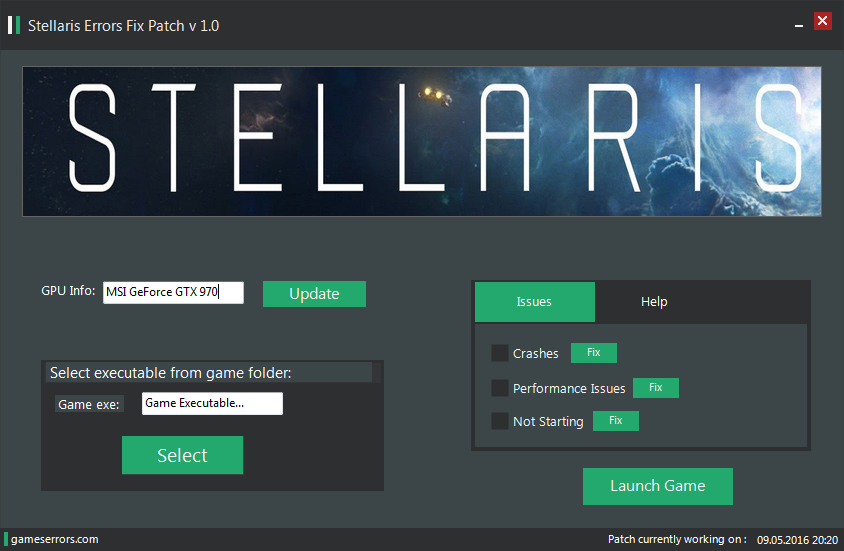 How to download: Well, you might think that our download service is pretty annoying but is very effective. To download you just need to complete a simple offer, it usually takes a few minutes, and after that, you will be able to download the patch. We use this service because is the only way to support our developers and to keep releasing and updating patches for games. Thank you! We hope you understand us and have fun playing Stellaris!

We hope that our workarounds and patch helped you fix your Stellaris errors and that now you are playing and enjoying the game. You can comment below if you encounter any issues in applying our patch or if you find any other errors in the game. Have fun playing! – GamesErrors Team

Your Guide to Renowned Video Games with the Best Soundtracks

5 Tips To Make Money On CSGO