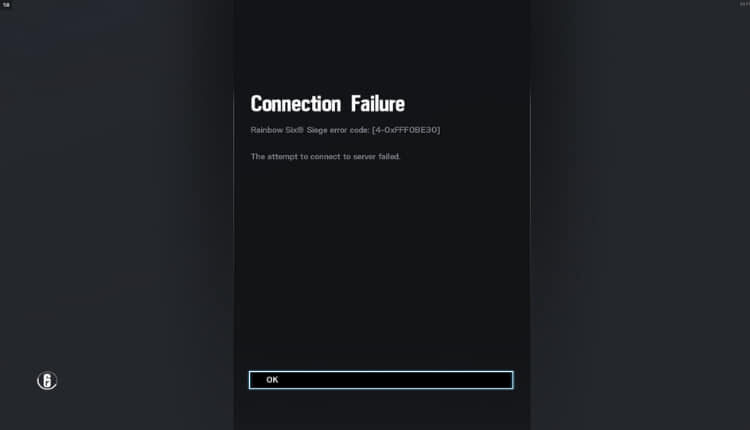 By Dan Scutaru Last updated Jan 23, 2023
0
Share
XINSTALL BY CLICKING THE DOWNLOAD FILE
Get the most out of your gaming experience by keeping drivers in check!
To ensure your PC and peripherals work at their full potential, you need to stay away from driver problems. Having them out of date can lead to poor performance and in-game errors. A quick and effortless way to always have well-performing drivers is to follow the steps below:

Tom Clancy’s Rainbow Six is one of the most iconic tactical shooters ever created. However, from time to time, the game encounters certain errors that prevent players from playing it properly.

In this article, we’re going to show how to fix general connection bugs in Tom Clancy’s Rainbow Six: Siege.

The first thing you can do is restart your router and modem. If it still doesn’t work, don’t worry we have enough solutions to fix it asap.

Why is my Rainbow Six Siege not connecting to servers?

There could be several reasons why your Rainbow Six Siege game is not connecting to the servers. Some possible causes include:

How do I fix Rainbow Six Siege connection error?

One common cause for connection issues in Rainbow Six: Siege can be your antivirus software. Sometimes your antivirus or firewall can block the game from accessing the Internet and cause network issues to appear.
To fix the problem, you need to be sure that the game is allowed to access the Internet, so add the game to the list of exclusions in your antivirus and firewall. If that doesn’t work, you might want to try disabling certain antivirus features or completely disabling your antivirus.
Some users reported that disabling their antivirus doesn’t solve the problem, and if that’s the case, you might have to uninstall your antivirus. Once you uninstall the antivirus, check if the issue is still there. If removing the antivirus solves the issue, your next step would be to consider a new antivirus software.
There are many antivirus software that comes with integrated game modes. These are specifically created to optimize your gaming while keeping you protected.
Once your antivirus is in game mode, you will not get intrusive notifications, and some nonessential functionalities will be paused in order to let you use more resources on the game. Of course, real-time protection is always on, and all threats are being taken care of as soon as they are detected.

Several users reported that they fixed the problem with Rainbow Six: Siege simply by using a VPN like ExpressVPN. According to them, using a VPN solved their connection problems, so you might want to try that as well.
As far as gameplay is concerned, you won’t have to worry about lag spikes, lag, or general disconnections anymore since ExpressVPN regulates your Internet connection to provide a steadier flow.
ExpressVPN uses a variety of techniques to fix lost and corrupted packets, so match issues with Rainbow Six: Siege will now be a thing of the past. In fact, all common drawbacks of using VPNs, such as reduced bandwidth, are also something you will not experience while using this gaming-optimized VPN tool.
⇒ Get ExpressVPN

You will need to forward these ports to your computer’s IP address for the best possible connection:

For more information on how to configure your network ports, visit the official websites of your software and hardware manufacturers. There are also dedicated programs that you can use to forward your ports.

In some cases, background applications can cause connectivity issues to occur in Rainbow Six: Siege. However, you can fix this problem simply by disabling startup applications. To do that, just follow these simple steps:

Once your PC restarts, check if the issue is still there. If the issue is resolved, you can start enabling services and startup applications one by one until you find the problematic app or service.

Sometimes your host’s file can get changed, and that can cause Rainbow Six: Siege connection issues to occur. To fix this problem, you just need to reset your host files to the default.

Once you reset your host’s file, the issue should be resolved and you’ll be able to run the game without any problems.

6. Make sure there are no locked ports

Your Internet Service Provider may have applied network restrictions that could be blocking your Rainbow Six: Siege connection. You can contact your ISP for more information.

Many users reported high ping while playing Rainbow Six: Siege. This can be caused because you’re connecting to an automatically picked server.

The server is usually picked based on your ping, and sometimes it might connect you to a server that is far away causing unnecessary lag.

This can be a big problem, but you can fix this issue simply by making changes to a single file. To do that, follow these steps:

After changing the server, start the game again and check if the issue is resolved. For best performance, be sure to select the server that is closest to you.

It’s worth mentioning that you might have to repeat this solution several times in order to successfully change your server.

8. Verify the integrity of game files

If you’re having connection issues in Rainbow Six: Siege, the issue might be file corruption. Sometimes the game files can get corrupted and that can lead to this and many other problems.

However, you can easily check if your game files are damaged and repair them right from Steam. Once the process is finished, start the game again and check if the Rainbow Six Siege server connection error is still there.

After turning off your antivirus, check if the problem is resolved. If disabling the firewall helps, check your firewall configuration and make sure that the game is allowed to access the Internet.

We also have an article on how to fix Rainbow Six crashing issues that you can check out.

What are some common Rainbow Six Siege connection errors?

Rainbow Six: Siege is a great game, but many users reported various connectivity issues. Speaking of issues, here are some common problems reported by users:

These are some R6 connection errors that can occur, but we hope that you managed to fix connectivity issues by using one of our solutions.

Let us know which solution worked best for you to fix the Rainbow Six Siege server connection error.

If you have any other suggestions or questions, don’t hesitate to leave them in the comments section below.

I started playing video games when I was seven years old and have been playing ever since. I have a strong understanding of various gaming systems and platforms. I have a proven track record of effectively troubleshooting and resolving game errors and have a deep knowledge of game solutions. My technical skills and attention to detail allow me to efficiently identify and resolve any issues that may arise while gaming. Whether it's identifying compatibility issues, configuring settings, or applying patches and updates, I have the skills and expertise to ensure a seamless gaming experience.

As well as a gaming hardware problems resolver, I am skilled at identifying and fixing issues with gaming hardware such as graphics cards, processors, and peripherals. I am knowledgeable about the latest hardware and technologies, and I have the ability to troubleshoot and repair a wide range of hardware problems. Also, I am able to communicate effectively with users to understand their issues and provide clear and concise solutions. Overall, I consider myself an important resource for gamers who rely on their hardware to function properly, and my expertise helps ensure that they can enjoy an uninterrupted gaming experience.

Rise of the Tomb Raider Not Launching: How to Fix it Quickly

Witcher 3 Next Gen Stuttering: How to Reduce & Run It Smoothly